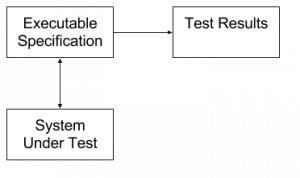 Executable specification is a "holly graal" of modern software engineering. It's very hard to implement as it requires:

FitNesse is one of such approaches that specifies function sample inputs and outputs then allow to run such test cases using special connectors and provide colour reports from test runs. It's easy to use (from specification point of view), but has the following drawbacks:

Above features are present in any other unit test framework: JUnit, unittest, … All such testing changes state and checks output.

And now quite crazy idea has come to my mind:

What if we forget about changing state and focus only on state validation? 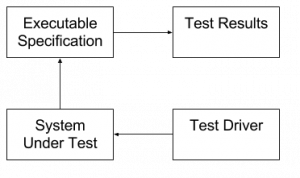 Then the executable specification won't be responsible for "test driver" job. Only state validation would be needed (including some temporal logic to express time constraints). That is much easier task to accomplish.

What about state changing then (the "Test Driver" role in the diagram) – you might ask? We have two options here:

So let's go back to Specification then. Let's review some high level requirements (taken randomly from IPTV area) written in English and how they could be transformed into formal specification languages (I'm borrowing idea of "test tables" from FitNesse):

A requirement: video should be visible after device boot unless it's in "factory reset" state

Here we have the following state variables:

Once parameters meaning has been specified by existence of log entries we could write the decision table here:

As you might have noticed I've added extra parameter "timeout" that delivers the temporal part of the constraint. The meaning of this parameter is as follows:

A requirement: the device should check for new software versions during boot or after TR-69 trigger, user might decide about the upgrade in both cases

And here comes the hard part: we don't know whether new software is present for installation, so we cannot decide about user dialog. New property is needed:

We can see that table behaviour is a bit redundant there: we needed to multiply specification entries to show (tr69_upgrade_trigger x new_sf_version_available) cases.

However, above test will show failures when:

A requirement: rapid channel change should not exceed 600ms

This one looks a bit harder because of the low timeout and the usual buffering done on logs. However, having log flush interval limited to 100ms one can keep quite good performance and measure time with enough granularity.

Another caveat here is to exclude channels that are not available in current provisioning of the customer (you should see some up-sell page instead).

Note that channel availability detection must be done at the same moment as channel change event – might be not true in most implementations (so not possible to reflect in our simple temporal logic language).

In order above method to work it requires some kind of implementation.

The outputs of such test:

Based on first output you need to adjust your rules / matching patterns. Based on the second you should adjust your test driver policy.

It look like a feasible idea for implementation. I'm going to deliver a proof of concept in randomtest.net project.

This entry was posted in en. Bookmark the permalink.