Change "origin" of your GIT repository 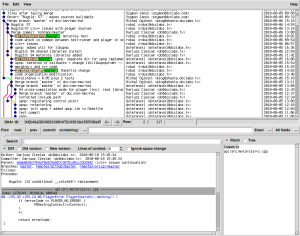 GIT is a distributed version control system – that means it doesn't require to have any central repository. It's possible to build system by exchanging commits between equal nodes. It's convenient, however, to mark one repository as the central one. Of course you can change your decision at any time. I'll show you how to do that.

If you created your repo copy by "clone" operation you will have "origin" remote branch defined. This remote can be used to pull/push changes.

If you decide to change this definition later you can issue the following commands:

After this change you can push your commits to new repository location (origin is selected as default remote branch for master, it's configured in .git/config):

That's all. Much simpler than moving Subversion repository.

This entry was posted in en and tagged git, vcs. Bookmark the permalink.

6 Responses to Change "origin" of your GIT repository